T20 World Cup Semi-Final:–New Zealand play Pakistan in Sydney on Wednesday & India play England in Adelaide on Thursday in the semi finals at the T20 WC 2022. The winners of these matches will play in the final in Melbourne on 13th November. The lineup was clear after the Super Sunday matches in Group two in which South Africa crashed out against the Netherlands & Pakistan prevailed over Bangladesh.

New Zealand & Pakistan will battle at Sydney’s famous SCG for a spot in the T20 WC final. After losing their first 2 Super twelve matches to India & Zimbabwe, Pakistan looked dead & buried as a chance to win the tournament. But 3 wins in a row & a shock loss from semi-final bound South Africa against the Netherlands opened the door for Pakistan to admirably reach the last four.

On Wednesday, November 9, New Zealand will play Pakistan in the ICC’s T20 World Cup 2022 first semifinal at the Sydney Cricket Ground. The Kiwis finished first in the Super 12, with their lone loss coming against England, and they put on some spectacular performances.

The Kiwis have to be concerned about their dismal record against Pakistan in the ICC tournament knockouts, having lost in the semis of the 1992 and 1999 World Cups, respectively. The Blackcaps now have a terrific chance to rewrite history and secure a second straight T20 World Cup final berth in the upcoming encounter. Pakistan, on the other hand, were just a few games away from closing the door on their rivalry with arch-rivals India and Zimbabwe when they lost their first two. Yet, they were granted a semi-final berth at the last minute after stunning triumphs over South Africa and Bangladesh. 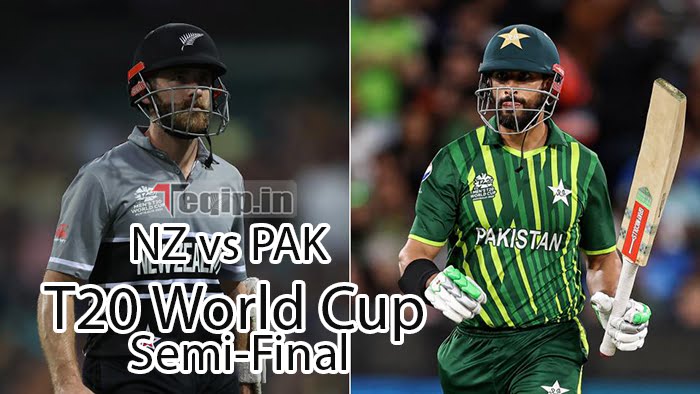 Babar Azam, Mohammad Haris, Shan Masood, Iftikhar Ahmed, Mohammad Nawaz, Shadab Khan, and Shaheen Afridi are among those who have played for Pakistan.

In the batting department, Glenn Phillips has been a lifeline for them. After losing their top order with hardly anything on the board, the middle-order sensation struck a match-winning century against Sri Lanka and followed it up with a sizzling 62 runs from 36 balls against England. In the middle and death overs, he would be a significant challenge for Pakistani bowlers.

So far, Shahdab Khan has been Pakistan’s most successful bowler in the tournament. Throughout the Super 12 stage, the vice-captain consistently made a name for himself in the wickets column. From five matches, Shadab has a total of 10 scalps to his credit, with an average of 11.20 per match. In the semifinal, the New Zealanders must be cautious with him.

When & Where to watch Live Streaming of T20 World Cup Match NZ vs PAK ?

Live Telecast
Both the semifinal matches of T20 World Cup 2022 will be telecast live in India on Star Sports channels.

Live streaming
Both the semifinal matches of T20 World Cup 2022 live will be available on Disney+Hotstar in India.